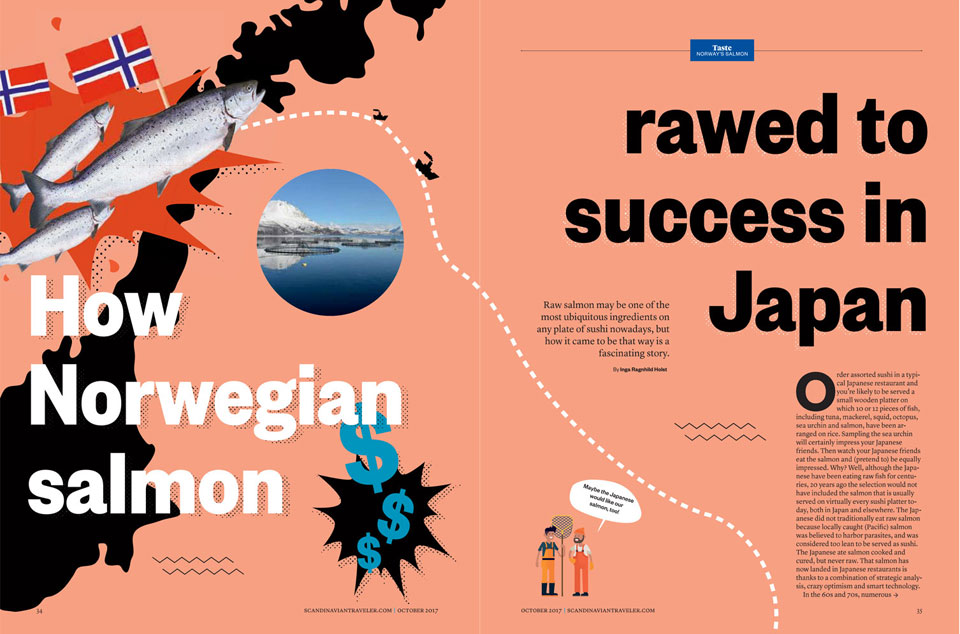 (SCANDINAVIAN TRAVELER) Eating raw salmon was unheard of in Japan 20 years ago. But a few bright sparks in Norway were able to persuade the Japanese to try it. Norwegian sushi salmon has since become a global phenomenon.

Order assorted sushi in a typical Japanese restaurant and you’re likely to be served a small wooden platter on which 10 or 12 pieces of fish, including tuna, mackerel, squid, octopus, sea urchin and salmon have been arranged on rice. Sampling the sea urchin will certainly impress your Japanese friends. Then watch your Japanese friends eat the salmon and (pretend) to be equally impressed. Why? Well, although Japanese have been eating raw fish for centuries, 20 years ago the selection would not have included the salmon that is usually served on virtually every sushi platter today, both in Japan and elsewhere. The Japanese did not traditionally eat raw salmon because locally caught, i.e. Pacific, salmon was believed to harbor parasites, and considered too lean to be served as sushi. The Japanese ate salmon cooked and cured, but never raw. That salmon has now landed in Japanese restaurants is thanks to a combination of strategic analysis, crazy optimism and smart technology.

“In the 60s and 70s, numerous Norwegian entrepreneurs began aquafarming. The big breakthrough came when they were able to successfully raise salmon in net pens in the sea. Production grew rapidly throughout the 70s. Increasing research and development contributed to better knowledge and found solutions to many of the earlier challenges. There was also little disease in the 70s and 80s. Aquafarming grew as a consequence of this success on several fronts and production became so big that we could start exporting salmon,” Jahn Petter Johnsen of the Norwegian College of Fishery Science, tells Scandinavian Traveler.

At that time, Norway mainly exported prawns and herring to Japan. Would it be possible to interest the Japanese in Norwegian salmon as well? A delegation consisting of the then fisheries minister Thor Listau and representatives from public authorities, research and the enterprise sector, flew to Tokyo to investigate this in 1985, Bjørn Eirik Olsen, a market researcher and fisheries envoy at the Norwegian Embassy in Tokyo explains.

“When the delegation arrived in Japan, they sampled raw salmon at the Norwegian Embassy. The then ambassador Håkon Freihow had previously thought that it could be interesting to try Norwegian salmon as sushi, and he got positive feedback from Japanese guests who had tried this unusual combination. When the Norwegian delegation tried raw salmon for the first time, they turned their noses up, but were not opposed to the idea that there could be a future in it. The following year, 1986, Project Japan was launched,” says Olsen, who worked on the project.

“Together with Hiroshi Niwa, who headed the Norwegian Export Council at the embassy in Tokyo, we developed a strategy to get Norwegian salmon into this high paying segment. What was new, was that we performed in-depth market analysis. We obtained statistics on the market and were able to analyze trends and user preferences at a detailed level. These insights formed the basis for the marketing project.

“Then we rolled up our sleeves and made a frontal assault on Japan. Going via Japanese importers would have been a waste of time, as they thought the fish was the wrong color, shape and smell. Project Japan contacted chefs instead. One of them was TV chef Yutaka Ishinabe, also known as The Iron Chef. The thinking was that if professionals of the caliber of The Iron Chef spoke favorably about the salmon, this would help influence popular perception.”

It took almost ten years to gain acceptance among the conservative – and initially very negative – sales managers on the Japanese market though.

The optimistic fish exporters would also get a helping hand from economic and cultural changes in Japan. The 80s saw the beginning of rapid Japanese economic growth that we now know was a bubble, but at the time seemed to mark the emergence of Japan as the world’s most powerful economy. The bubble years were characterized by conspicuous consumption, including Japanese investors taking a 51% stake in the Rockefeller Center in New York ($846 million) and buying (all of) Van Gogh’s Sunflowers ($36.6 million). Eating habits also changed dramatically. Instead of bringing a lunchbox containing grilled fish, pickled vegetables and rice to work, salarymen began eating out in restaurants, often eating sushi. Japanese fishing production also fell at the same time and very quickly the country was transformed from a seafood exporter to an importer. In 2016, Japan imported 34,000 tonnes of salmon worth €274 million, according to the Norwegian Seafood Council.

One of the seafood producers involved in this great salmon adventure is Lerøy, that exports around 10,000 tonnes of salmon to Japan today.

“We were one of the first companies to enter the Japanese market. We established a direct route to Tokyo as early as 1995 to bring the salmon to market as quickly as possible. Today, salmon arrives in Japan no more than 35 hours after leaving the sea. Japan is the most demanding market in the world, and freshness and quality are crucial,” says Henning Kolbjørn Beltestad, CEO of Lerøy.

The Seafood Study 2017: Insights and Outlook Seafood Consumption in Japan published by the Norwegian Seafood Council, shows that Japanese consumers are extremely sophisticated. While French consumers can evaluate 6.2 types of fish when they are out shopping for dinner, the average Japanese consumer will usually evaluate 8.3 types.

In partnership with its strategic customers in Japan, Lerøy has developed a separate product for the Japanese market, Aurora Salmon.

“It is a high quality salmon that is produced in Troms and Finnmark. The fish grow more slowly and have a higher fat content than other salmon,” Beltestad says.

The fish is perfect for sushi. Chef Ishinabe says that Norwegian salmon is suitable to serve both raw and cooked.

“It has a higher fat content than Japanese salmon which gives it a soft feeling and more taste in the mouth. It is of high quality and can be used for everything,” Ishinabe says.

But what is most astounding about the success of salmon in Japan, is that it has become a global trend. The history of sushi started in the Tang Dynasty in China around 500 BC, when they conserved raw fish by storing it in rice. In the Edo period (1603 – 1868), they began eating sushi as we know it today in Tokyo, according to an article published by the Norwegian Food Research Institute, Nofima. Japanese emigrants brought their sushi with them to the US and today it is eaten from Tokyo to Trondheim – and all points in between. When Japan became a great economic power in the 1970s, interest in the country’s gastronomy increased and sushi spread all around the world. In Norway alone, €85.9 million worth of sushi was consumed in 2014. Associated with high quality and healthiness, the Japanese dish is served with Norwegian salmon everywhere now. Norwegian aquaculture salmon exports reach an incredible 150 countries. So while sushi is undeniably Japanese, say a silent thank you to Norway the next time you sit down to savor salmon nigiri.

This article was published in SAS Scandinavian Traveler in 2017